Senators of the Republic of Poland and high-ranking representatives of the Polish Consulate General in Cologne meet with Polonia Hessen at HELLER.

More than 2 million people with a Polish migration background live in Germany, over 160 thousand of them in Hesse alone. There are numerous Polish and German-Polish organizations, clubs and associations. The Polish community in Hesse is particularly active. Numerous events, readings and concerts are organized in Darmstadt, Frankfurt and the surrounding area. The above-average activity of the Polonia, as the Polish community is called, leads to the fact that the representatives of the Polish Consulate General in Cologne, as well as delegates of the Polish Parliament, regularly visit the state of Hesse.
On September 23, 2022, a special event took place. Four senators - representatives of the second chamber of the Polish Parliament, the Senate, Mr. Władysław Komarnicki, Mr. Jacek Bury, Mr. Paweł Arndt and Mr. Wojciech Ziemniak, met in Darmstadt with leaders of organizations of Hessian Polonia. The meeting was also attended by Consuls of the Consulate General in Cologne, Mr. Jacek Biegała and Jan Krzymowski, as well as the head of the German Polonia Office Klaudyna Droske. The meeting was organized by Michael Kochanski from Darmstadt, the editor of the magazine "Twoje Miasto", well known among the Hessian Polonia.
The meeting took place in the Darmstadt office of HELLER Ingenieurgesellschaft mbH. The owner, Dr. Sławomir Heller, as well as the two managing directors, Henning Balck and Christian Komma, had the opportunity to introduce the company to the senators, consuls and the participants of the event. The history and development of the HELLER company was appreciated by those present as an example of very successful and sustainable cooperation between representatives of both nations. The daily cooperation between HELLER Ingenieurgesellschaft in Darmstadt and HELLER Consult in Warsaw has not only led to economic success in the last decades, but also contributed to a deep friendship between numerous Polish and German employees. 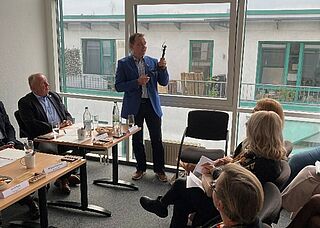 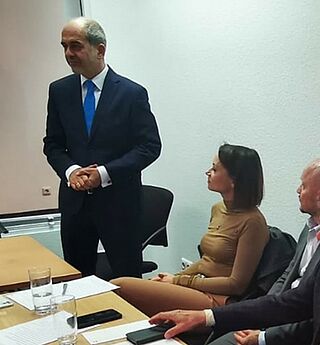 For more than 25 years, HELLER has been a respected partner of the road authorities of the federal government, the federal states, districts and municipalities. Since the introduction of the ISO standard 55000, the company has been developing concepts for the training of civil engineers and practical solutions for the application of Asset Management in the road sector.